The little town of Tatum has a long and interesting history. Today it is a thriving East Texas town encircled by five large towns. These larger commercial centers that are approximately twenty miles away, allow space for forests, farms, and country roads to dominate the area.

In the not too distant past, our part of the world was a green sea of tranquility. Tall pine and oak trees dominated red clay hills and the Sabine River bottom land. Man had not invaded this vast virgin landscape.

Then, a few Indians from the north moved into the paradise of plentiful native food sources and became the peaceful Caddo tribe. There was little need for war or long trips. This new Eden provided everything necessary for a satisfying life in a community of like-minded natives.

After centuries of isolation, French and Spanish explorers invaded the peaceful place and each claimed it for their god and for their country. An inevitable conflict ensued and the area was declared a no-man’s land. This status prevailed until Texas became a republic in 1836.

Meanwhile, the Caddoes suffered from diseases and alcohol addiction brought by the “civilized” men. To add to their misery, the displaced Cherokee nation was marched along the trail of tears from their homes in the eastern forests to a barren reservation in Oklahoma. Many of these Cherokees moved into Caddo territory and displaced this tranquil people.

After the Texas war for independence, all the East Texas Indians were cruelly banished to Oklahoma. No longer were they free to roam the pine forests in harmony with nature.

The Indians had beaten down a pathway through the woods, hill, creeks, and across the Sabine River. This trail was used for faster travel throughout the area that would later be Northeast Texas. The forest path led through what is now the town of Tatum and went southward to the Spanish fort at Nacogdoches.

In 1813, Nicholas Trammel rode into North Texas, near present-day TexArkana, with the purpose of making a road which would accommodate wagons and men on horseback. This romantic, some- times lawless man, had the blessings of the U.S. government, which obviously had its eye on Spanish-owned Texas.

One of the best known tales which persists even today is about the treasure at Hendrick’s Lake. That lake is a narrow former river-bed about four miles from Tatum. It empties into the Sabine River only a short distance away.

In 1816, Jean Lafayette’s pirates raided the Spanish ship Santa Rosa in Matagora Bay. The ship was loaded with silver ingots melted from the treasures and mines of South America.

The gang loaded the treasure on wagons and headed north towards Saint Louis to have the ingots made into coins. 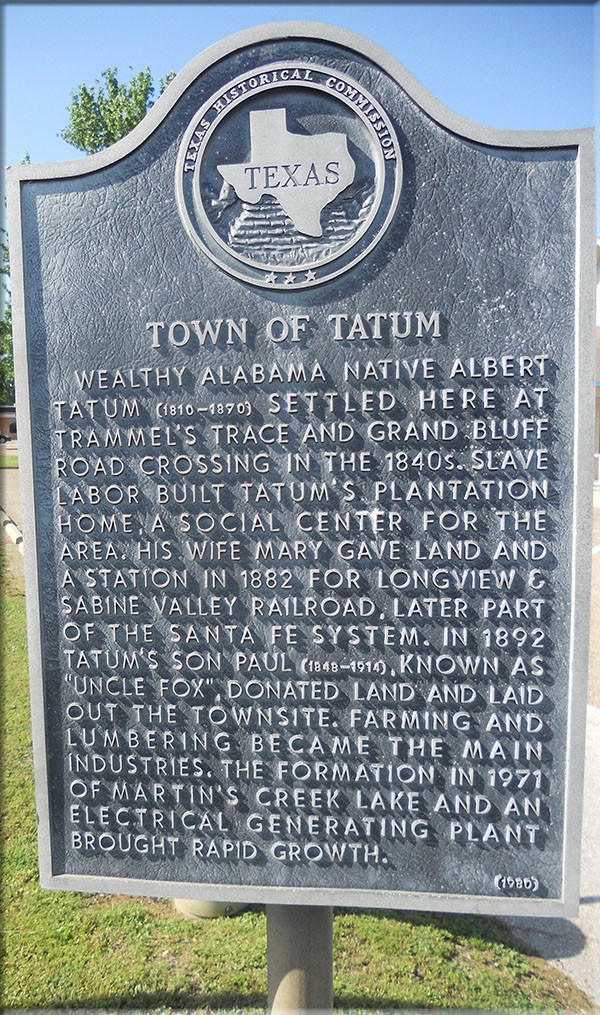 As the pirates neared Nacogdoches Spanish soldiers began a chase along Trammel’s Trace. The horses pulling the wagons were no match for the faster Spanish soldiers. Around Hendrick’s Lake the pirates decided to dump the silver into that body of water.

An account of this affair appeared a few years later in a St. Louis newspaper. The story didn’t end there.

Many treasure hunters have explored the lake for more than one hundred and seventy-five years. Present-day adventurers have used sophisticated equipment to find the silver but to no avail.

Tantalizing artifacts have been brought from the dark, placid waters but no silver, yet.

One of the first pioneers to use the newly opened Trammel Trace was Daniel Martin. He and his family left Missouri and headed for Texas. At Pecan Point across the Red River they hit the trail to Nacogdoches.

Martin had been an adventurer who fought in the Indian War in Florida. He stole his commander’s daughter, married her, and raced to Missouri. Apparently restless, he bundled up his family and headed for more adventure in Spanish Texas. He had been given a grant of land by the king of Spain.

When the migrant family found the area around a creek later named for him, he decided to settle there. A fort was built to guard against roaming Caddoes and Cherokees, and he had several skirmishes with these natives. Some lives were lost on both sides. 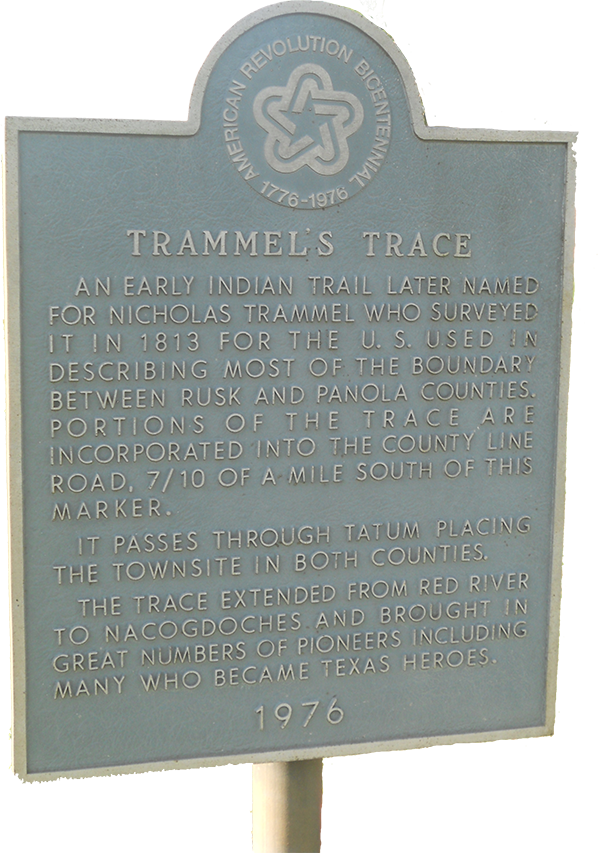 Another pioneer was Albert Tatum who brought his family, household, and slaves from his Alabama plantation in the 1840’s and settled first in Harmony Hill, a thriving town four miles from the future town of Tatum.

The Tatum family established a plantation, which is now the city of Tatum, in 1865. Former slaves, family members, and an abundance of good land, timber, and water produced a successful business enterprise.

Tatum’s home was built at the crossroads of the Trammel Trace and other trails leading east and west. The house still stands today as a monument to the spirit of the Tatum family.

Other monuments to the Tatum family are the town itself, land for a church, for a school, and the city’s cemetery. All were donated by Paul “Uncle Fox’ Tatum, the son of Albert Tatum. This some- times eccentric, progressive thinker believed that the newly built railroad through his plantation would be an ideal place for commercial activity.

In 1882, after the Santa Fe Railroad passed through Tatum on the way from Longview to Beaumont, the place became a boom town. Hotels were built, mercantile businesses thrived and farmers and sawmills could easily get their goods to the higher priced markets

The town had its ups and downs in the early 1900’s. World War I and II affected it tremendously. The young and middle-aged men went to those wars, and many of those who lived through the experience never returned to the small town.

Spurts in growth occurred in the 1950’s and 60’s when oil and gas were discovered and produced both inside and surrounding the town.

In the early 1970’s the Texas Utilities Company moved to Tatum and built Martin Creek Lake for a huge electrical generating plant. This company also strip-mined thousands of acres for lignite to fire the steam plant.

The small town of Tatum has changed a lot since its settlement and its incorporation. It has become a “bedroom town” for workers who have jobs in nearby cities.

Tatum continues to have great charm and it has retained much of the spirit of its founders and the early settlers.

This history was condensed from a 37 page book Tatum…, A Place Called Home, by Cecil Williams.